Last week I was at the 2019 annual meeting of the American Society of Criminology (ASC). It was a great opportunity to see friends and colleagues, learn about new developments in the field, and present my paper on environmental features associated with sexual harassment.

This was my 3rd ASC (2nd in sunny San Francisco) but my first without a “crime and place“ stream. This meant that instead of sitting in one room and waiting for the presentations to come to me, I had to curate my own experience. With 1,301 sessions (according to the programme) there were definitely a lot of options (4.110534247 times 10 to the power of 3488 possible alternate conference experiences to have, to be exact…!), but here I will summarise my version of this conference and highlight some interesting (to me) papers, breaking things down into themes.

There were quite a few presentations about fear of crime, with many emphasising the importance of the situational context in which fear is experienced. It is so exciting to now see fear of crime research back on the map (har har); I am noticing a bit of a boom in this area with more and more scholars getting excited about perception and safety in the environment.

I particularly liked Valerie Spicer’s (Simon Fraser University, Canada) presentation about using street intercept surveys to measure changing perceptions of safety in specific locations. Street intercept surveys use a location-based sampling approach (stopping people to ask questions on specific street intersections). This allows for the mapping of responses, and through a longitudinal design, we can see maps of perception changing over time. For example, they noticed a shift in the location of fear hotspots with changes in the environment (for example the opening of a new transit hub). This method also allows for the sampling of people possibly not captured by other traditional sampling frames, such as homeless people who may have very different fear patterns to other users of public spaces. I particularly liked that the research team asked not only about fear of crime, but also about community strengths, focusing on the positive experiences people have with public spaces as well. The paper is available here. The below image is one of the maps from the paper showing location-specific measures of fear of crime: 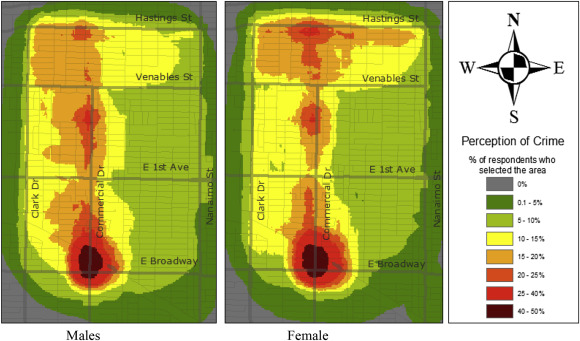 Since building a mobile application to measure fear of crime (see paper here) my thing is really apps for fear of crime research (even have a review of all these for which you can read the preprint here). So of course I was very excited to see Michael Chataway’s paper (Queensland University of Technology, Australia), presented in the same session, which used a mobile app, and similarly to Valerie Spicer’s paper emphasised this shift in focus to perception of safety instead of unsafety. He outlined that absence of fear is not necessarily the same as feeling safe. He suggests to ask about safe places, in order to explore their characteristics, and see how they differ from places perceived as unsafe. For example, he found that a feeling of “at homeness” was strongly associated with feeling safe. This is mirrored in my PhD research finding that “familiarity with an area” is associated with reduced odds of feeling worried about crime. I look forward to seeing more work develop in this area. This paper is available here

Ps: if anyone is interested in apps for social science research, Michael and I have a webinar available hosted by the UK Data Service here

In another fear of crime presentation, James Hurst (Universiry of Arkansas Little Rock,USA) carried out location-based retrospective surveys to ask about people’s perception of safety in specific university campuses. He originally asked about feeling unsafe at different times of the day, but actually found that there was almost no variation in perception between the different times. This is contrary to what I found in my mobile-app based study in London (see above-mentioned paper) , where time of day actually did matter. I would be really interested in finding out more about whether this is an artefact of the measurement tool used, or something else may be going on there. I cannot currently find a link but have asked James and will update here.

Many of the transport presentations could technically fit under the fear of crime label as well, but I’m separating them out anyways, because transport research also merits its own section due to the volume of emerging work.

It was great to see the presentations about the international study on college students’ experiences of fear and victimisation on public transport across the world, coming from the book of Vania Ceccato (KTH, Sweden) and Anastasia Loukatou-Sideris (UCLA, USA). The book is called “Transit Crime and Sexual Violence in Cities: Internatoinal Evidences and Prevention” and will be published by Routlegde next year, keep an eye out for it my transport nerdy friends! Here, four of the chapters were presented, Stockholm, Bogotá, San José, and Lagos. It was interesting to see similarities (and differences) in students experiences across these vastly different contexts. Andrew Newton (Nottingham Trent University, UK) and I have a chapter in said book about London and it was nice to see how other researchers approached the same issues worldwide.

In another session Elenice De Sousa (Montclair State University, USA) also explored fear of crime on different types of transport in Belo Horizonte, which, opposite to the presentations mentioned above, actually found that lower fear was not associated with frequent ridership. The case of Bogotá is further interesting due to having two very different bus routes one with many security features and another without, creating very different environments for passenger safety. I cannot find a link to this paper, but Elenice has written about bus crimes in Brazil before, so if you want an idea, that paper is available here

I also liked the presentation by young scholar William Johnson from George Mason University who is working with Barak Ariel (Cambridge, UK) looking into the crime preventative impacts of platform edge doors. They had data from London Underground and considered the role that PEDs can play in preventing many of the crimes (and non crimes) which occurred. He also coined my favourite americanism of the conference by calling the BTP “British Transit Police”, which I liked because if only the letters weren’t capital it would be absolutely accurate. Anyway it is always so good to see more young scholars working in the area of transport crime! I believe this paper is still forthcoming, so I’ll keep an eye out for it.

Papers that emphasise interesting methods are often my fave at conferences because they offer some new way to approach a topic, and have the potential to further understanding in so many areas of criminology and wider social sciences. There were a few neat things like this presented at ASC.

Going back to perception research, I’ve been working on putting together a project with Emily Moir (Griffith University, Australia) to use virtual reality (VR) scenarios to explore guardianship in public places, and how different interventions are perceived by the target being protected. So I was very happy to see Jean-Louis van Gelder (University Twente) present a paper about using VR to study offender decision making by comparing people’s responses to text based vignettes and VR scenarios of a bar fight capturing various related outcomes. This paper is already published here. The below image is from this paper showing the filming process of the “bar fight” scenario:

There was also a paper introducing the importance of considering local level relationships between outcomes and their covariates, rather than focusing on the global, by using geographically weighted regressions in crime research by Martin Andresen (Griffith University, Australia), and a paper using causal mediation analysis by Krisztian Poch (LSE, UK) to study normative and non normative approaches to duty to obey (paper currently under review for Journal of Experimental Criminology). Both are methods I now want to learn more about.

Finally, the session I was most excited about actually was not really any paper, but the ASC Forum on Academic Integrity. I’ve been really interested in this topic since Kim Rossmo advised to read “Rigor Mortis: How Sloppy Science Creates Worthless Cures, Crushes Hope, and Wastes Billions” by Richard F Harris. I super strongly recommend this book to anyone interested in how to improve science. The forum was set up in response to a recent (very well publicised) case of a retraction request of a paper by one of the co authors. If you are not familiar with the case, there is a medium article for you to read here and Justin Pickett’s (University of Albany, USA) piece on OSF available here

The session consisted of an opening by the panel (Sally Simpson and Laura Dugan (University of Maryland), and Daniel Nagin (Carnegie Mellon University)) where they outlined that they will not be discussing the case specifically but are looking for suggestions for improvement and to address questions and concerns. The main outcome so far seems to be that ASC journals are now subscribed to the Committee On Publication Ethics (COPE). Beyond that they are seeking suggestions, so if anyone has ideas now seems like a good time to reach out.

The discussions were across a range of issues, from the rights of whistleblowers, to citation cartels, to whether we trust internal investigations (many criminologists seem not to when thinking about the police so why don’t we apply the same standards here?). A few people mentioned to consider who is affected, not only the authors and editors and academic institutions, but also consumers of these outputs; practitioners who wish to implement research findings, and study participants or members of the communities studied who may benefit from the research should all be able to trust in them.

The session was recorded, so it will be possible to see all this in case you’ve missed it. I will update here when I have found access to it with a link. It was overall great that a discussion is starting to take place and personally I was really honoured to meet Justin Pickett and shake his hand for being so brave and driving change in criminology ahead.

Overall it was a great ASC. I saw many more inspiring and engaging sessions (eg on guardianship with great papers by Emily Moir, Danielle Reynald, and Zharina Vakhitova (all Griffith University, Australia), and a paper on a randomised experiment introducing super intense flood lights to the streets of New York City to reduce crime by Aaron Chalfin from University of Pennsylvania, USA) and got to reconnect with colleagues from across the globe, which all makes me feel so so lucky to be part of an exciting and evolving field of research. I hope to return again soon.