About this time last year I received funding from the Manchester Statistical Society Campion Grant to carry out some research looking into appeals for informaion made about missing persons on Twitter.

The motivation behind this is that police agencies globally are seeing an increase in reports of people going missing. These people are often vulnerable, and their safe and early return can be a key factor in preventing them from coming to serious harm. One approach to quickly find missing people is to disseminate appeals for information using social media. In fact, police, and other agencies, make frequent use of social media (such as Twitter) to send out appeals for information.

The goal of this project was to better understand how police accounts tweet appeals for information about missing persons, and how the public engage with these tweets by sharing them.

To achieve this goal we analysed 1,008 Tweets made by Greater Manchester Police between the period of 2011 and 2018 in order to investigate what features of the tweet, the twitter account, and the missing person are associated with levels of retweeting.

In particular we wanted to look at different features associated with the tweet, the twitter accounts, and the missing person, and any associations with engagement by the public, measured as retweets.

Here I will highlight some of the most interesting findings.

First we identified features associated with public engagement that might influence engagement from a litearture review. We identified the following:

We then went through our sample of 1,008 Tweets that were appeals for information about missing persons taken from the 56 GMP Twitter accounts identified for this study, and coded for all of these elements (except age, we abandoned it as this was too messy really…!). Please see the preprint for details on conceptualisation and operationalisation of these variables. Also for the full set of results, as below I will highlight only two of the most interesting ones, the paper itself contains many more!

First we looked at the importance of photos, in particular if people engage differently with a custody image versus a regular everyday photo (Figure 1). We found that custory photos are retweeted less than regular photos. Using multiple photos does not seem to matter. The point estimate is the median, and the arms represent the interquartile range. 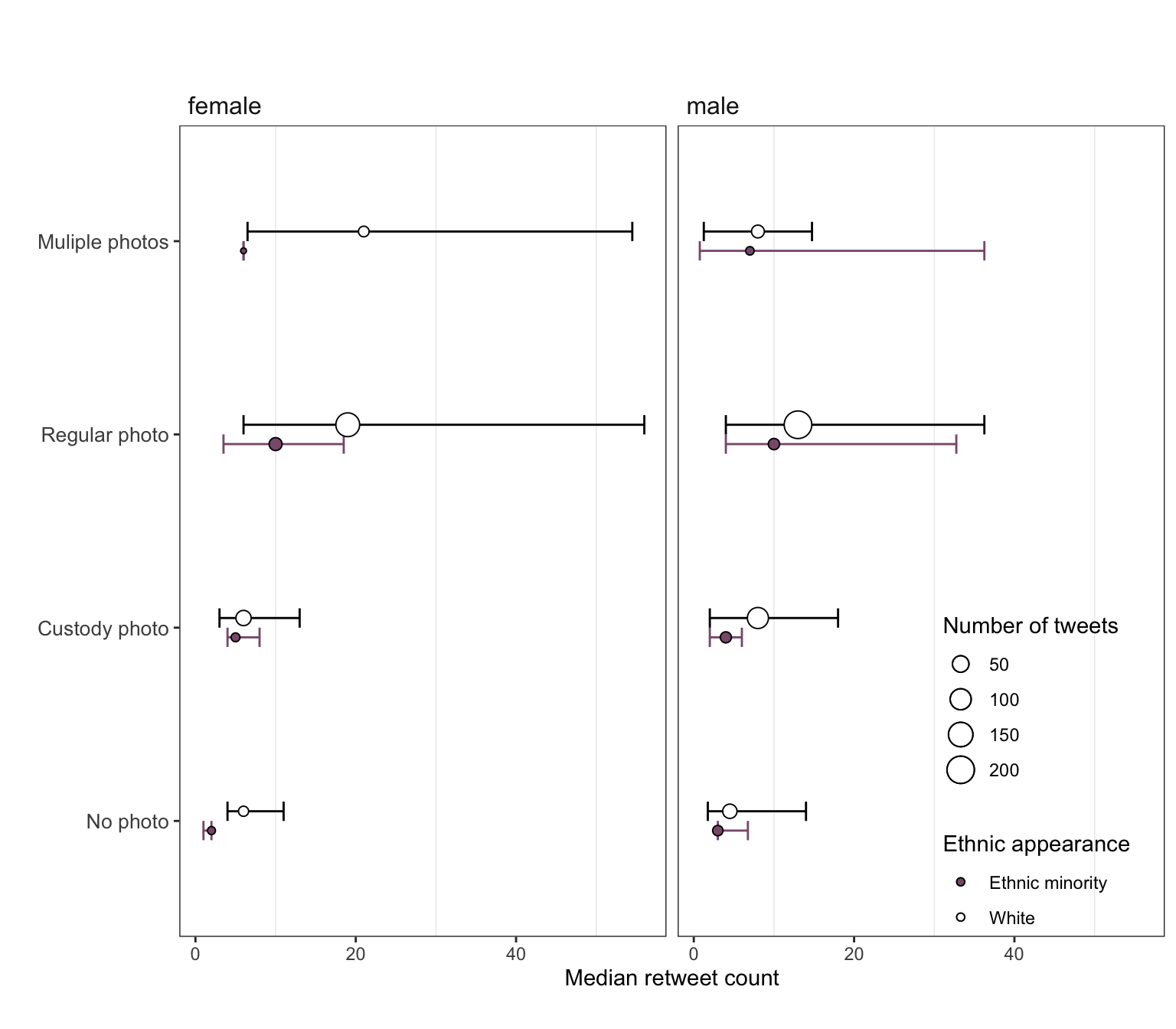 We also looked at the types of phrasing used in the Tweets, by coding these into different types of templates.

Here are he list of templates identified through qualitative coding, with an example of each:

We compared the number of retweets between each template (Figure 2). The point estimate is the median, and the arms represent the interquartile range. 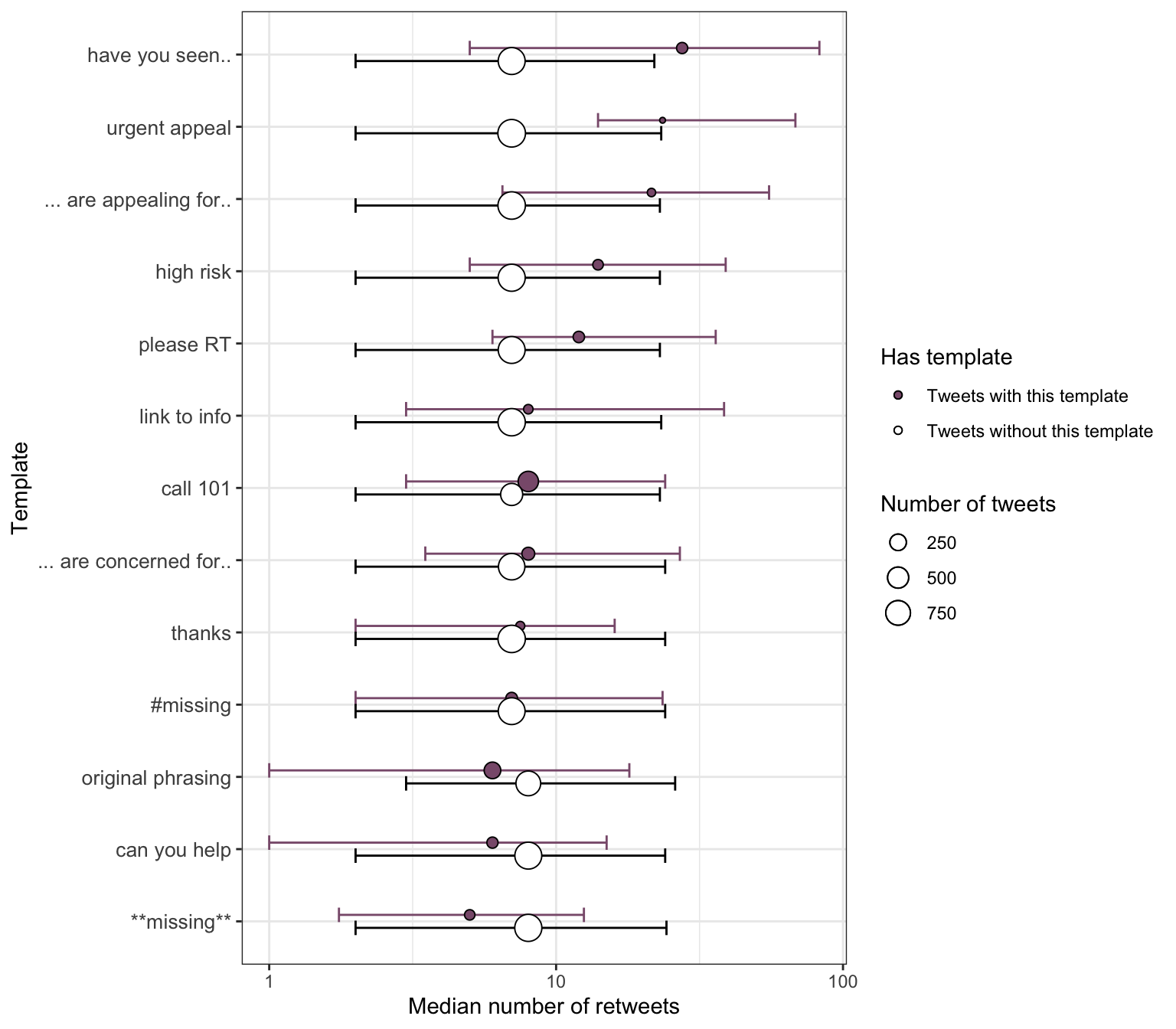 These are just two interesting insights gained from exploring these tweets. In the full paper we explore a range of features associated with the appeals for information about missing persons made on Twitter by greater Manchester police.

In doing so, we uncover how the police currently construct such appeals, and whether we can infer any structure in the practice. We find that there is some structure, but there is also variation in how these messages are crafted, as well as in other features such as the type and quality of photo used, the phrasing and punctuation used, and the perceived sentiment that results.

We further considered how engagement, measured as retweets varies between these differently structured tweets, and draw conclusions about what we think might be important to follow up.

In sum, with this paper we provide an insight into how appeals for information for missing people are shared by a major UK police force, and how the public react to these messages. By doing so we serve as a reference point for an issue that is internationally relevant, affecting police and other organisations worldwide, and hope to spark future work in the area, preferably prospective or experimental studies to establish causal relationships between the features identified and engagement.

Read the full paper here: https://osf.io/preprints/socarxiv/wugxs and do reach out if you have any thoughts/comments/feedback/questions/ideas for future research!