Back in February someone on Twitter recommended the book Pitch Perfect: How to Say It Right the First Time, Every Time by Bill McGowan and Alisa Bowman. It was still in the time before corona (b.c.) so I went to a physical library (wow) and got a physical copy (wow) and read it while on a weekend getaway (wowowow). While it started out a bit slow (a lot of convincing the reader that the book and tools are useful, like sure it would be great if I could afford some one-to-one coaching from the author, but it’s not likely to happen to me unfortunately…) I found there to be many useful pointers, which can help with presentations and interviews, so I will summarise some below. 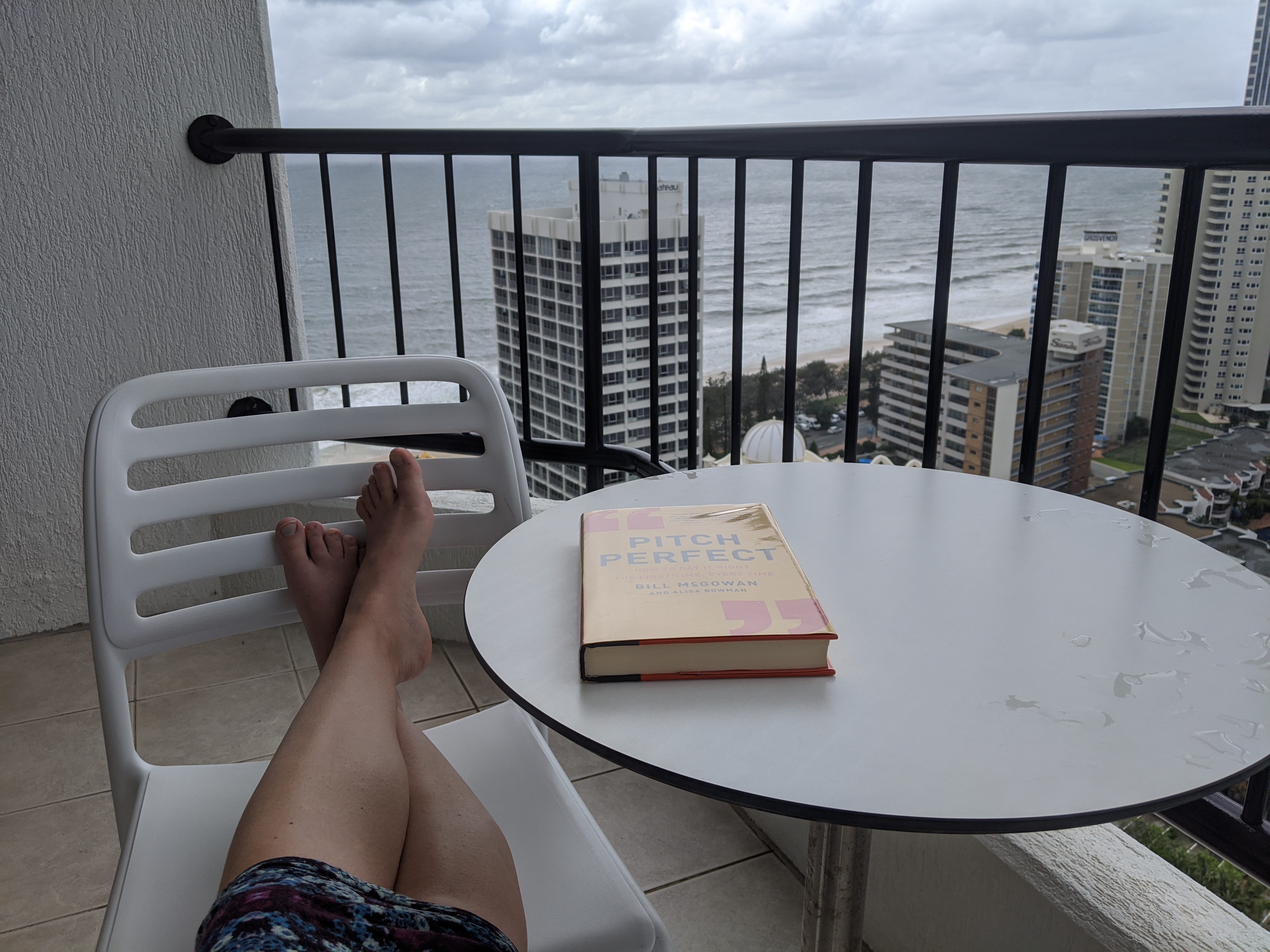 The overall concept: the 7 principles

The book is structured around seven key principles, which are then discussed in more detail throughout the book. These are:

Get attention by starting with your “best materials”. Don’t ease into the point, instead start the presentation/talk with a concise and compelling statement. I feel like academic presentations are particularly bad at applying this principle, so I have started being a bit more active about foregrounding my key findings.

The premise of this principle is that you want to “direct the film” of your presentation or talk with visuals that will grab people’s attention (the book uses the example of Paul Sorvino slicing a close of garlic with a razor in prison). Illustrating your points with descriptions of engaging stories makes your points more memorable and better holds your audience’s attention.

This applies to presentations and interviews, with presentations you can use actual images if you have a slide deck, but with interviews it has an effect that means your interviewer might better remember you. “When the interviewer goes back to her team to talk about the twenty different candidates she’s seen that day, it’s the stories that will stick out in her mind.”

Don’t be afraid to cut out material. If it’s not essential to include to make your point, you can probably do without it. People’s attention span is short, so don’t waffle because you will lose them. (I am not sure about the naming of this principle… I think it’s about “boiling down” to the core message, like you’d boil down pasta sauce???)

As far as I can tell this principle basically amounts to “slow down”. Use a slower pace and deliberate pauses to allow you to think through what you’re about to say, and help avoid saying something silly, or using filler words or sounds like “like”, “umm”, and so on.

This principle is all about “be confident in your message”. A lot of this is about body language, and I believe it taps into the “power pose” research. Unfortunately, I do believe that this work doesn’t actually replicate :( Anyway there are some tips about how to sit, what to do with your hands, to keep smiling a little bit always, and to maintain eye contact. For example, if you’re uncomfortable with eye contact a handy tip is to actually stare at a man’s sideburns or a woman’s earring - it will apparently seem like you’re looking in their eyes.. (although I just tried this and I’m not convinced…)

This is more about listening/conversation skills than presentation skills. The message of this principle is to display genuine interest in what the person talking to you says, both with facial expressions (again eye contact, smiling), but also genuinely giving them your full attention. I think this is just basic decent conversation practice, but McGowan and Bowman mention lots of people are just queueing up the next point they want to say in their head instead of actually listening, and so if you’re doing this, stop! Also get off your phone (unless you’re taking notes…?)

I’ve never watched Mad Men, just not really my jam, but the idea of this principle is to be like the protagonist and steer conversations to stay on points that you are comfortable with. This seems especially relevant to interview situations, where you are asked a question that isn’t quite your comfort zone, the idea is to shift the topic to something that plays to your strengths. “If you don’t like what’s being said, change the conversation”.

Anyway I know it’s not ground-breaking or anything, but really do practice everything and often, this is a point I fully support.

Another thing I found helpful was the idea of conversational templates. This ties in with the point about practice. With practice you can develop a template for different types of conversation scenarios.

This can be useful for interviews (a template for answering certain types of questions that you’re likely to be asked) or or for the post-talk networking type events. This involves preparing some talking points around recent events. Initially this sounded a bit cringey to me, but actually, being someone who struggles in these situations and ends up just talking about nothing to fill silence, I am thinking it might help me. McGowan and Bowman write:

“Having a conversation template like this can help you avoid putting your foot in your mouth. And if you’re shy there’s an extra benefit: it gives you something to say. It takes the pressure off of having to be engaging on the spur of the moment. The less pressure you feel the more articulate you’re likely to be.”

When you are asked a question, first make sure to listen to it in its entirety. Don’t cut off the person asking the question in order to answer. Wait for the whole question, and then before answering, think through the following 3 points:

Following this three-step process will “…keep you from rambling and meandering your way through some long-winded and redundant speech”.

Sometimes you might get asked a question where it is difficult to show off your skills (in interview) or for you to contribute your experiences (at a dinner party). Here McGowan and Bowman suggest applying the Don Draper principle (see above) of shifting the topic to suit your skills. BUT you want to be very careful here, if you change the topic abruptly, the trust built up with your audience/interviewer might decrese. One approach is to mirror a little of the question in your answer. Try to touch on a broader topic which encompasses both the question and the topic you want to veer into, and make your transition.

The book gives this example: “Let’s say you’re at a dinner party and someone is talking about (…) admission process for preschools”. This topic is interesting for parents of preschool-aged children, but his children are in college. So he steers the conversation like so: “I gotta tell you, this kind of admissions stress will follow them for years. My daughter just had an interiew to study abroad…”. Practicing this mirroring and subtle transition might help you in an interview setting to talk a lot about the topics you are comfortable with, while still answering the questions of your interviewer.

Ending your talk/presentation/answer/sentence is an important skill to master as well.

For example, McGowan and Bowman suggest that ending your presentation with the usual summary recap is not very strong. Instead you could end with suggestions for your audience to try something new, projecting the future benefits they will reap if they heed the lessons from your talk/presentation/etc. It seems like an applied, future oriented recap. He gives the example of ending his own talks with:

“So next time you give a speech think about starting with content that’s unpredictable, visual, and anecdotal. I think you will find your audience is more engaged and your message resonates more effectively.”

Regarding conversations the advice is to end them sooner rather than later. “You want to leave people wanting more. You don’t want to leave them thinking Thank goodness that’s over with.” This applies to answering interview questions as well. You want to give a thorough answer, but to also keep it concise, and not ramble on for 10 minutes, inevitably taking yourself into tangents that may not be relevant to the original question.

A difficult situation to end a conversation can be when chatting with someone at a party/conference/networking event/whatever. In these cases it is best to be honest. The book suggests saying something like: “Listen, I know you have a ton of people to mingle with and touch base with, so I just wanted to say hi. It’s been so great talking to you, and I know we’re going to see each other at this off-site next week. Maybe we can catch up again there.”

And finally, when I cannot stop talking, and someone needs to jump in, a tactic they might apply is the “Camouflaged Cutoff”. To apply this, just finish my sentence (like we’ve been married 40 years) and then segway into what you wanted to say. The book offers this template: “It’s interesting you bring that up, because that’s really at the heart of another topic I want to get to…” Or if you’re bringing someone else into the conversation: “I think Susan was mentioning something relating to that recently. Susan what was it you were saying about…?”

The book was an easy read, and I definitely learned some tips from it. It would be great to have actual coaching from the author, but since that’s not something that’s looking likely in my future, the book did a good job of giving pointers. The biggest take-aways for me were to practice practice practice, make conversation templates, think in stories, and take time to listen and talk only when I’m ready.